If ever a village should have died it is Pugwash; devastating fires razed the village several times, yet, more than 100 years later it is a thriving community.

In the mid to late 1700s, after the expulsion of the few Huguenots living among the Mi’kmaq, an influx of colonists from the United States settled in the area. First came the New England Planters (an Elizabethan term for colonists), lured by land grants from the Nova Scotia government. Soon after the American War of Independence, United Empire Loyalists fled the United States to Canada. Then Britons, Scots, and Irish, looking for a better life, arrived. Influenced by the broad accents of the European tongue the settlement’s Mi’kmaq name, Pagwe’ak became translated to Pugwash.

Shipbuilding and the European demand for lumber brought prosperity to Pugwash. Wealth bred commerce. By 1850, Pugwash started to "get some manners." The Court of General Sessions passed a law prohibiting livestock from roaming in town. Townspeople built several churches and formed societies. A temperance group tried to influence those who imbibed. Pugwash appointed an overseer to dispense welfare (through taxation) to the needy. The "Collector" ordered affluent persons to support impoverished relatives. These were the boom years, when prosperity carried the aromas of sawdust, tar, rope, molasses and spices from the harbour. When the "age of sail" died and the shipbuilding industry collapsed, Pugwash faced a period of economic hardship.

The arrival of the railway in 1890 did not give Pugwash the economic boost expected. Yet, the forestry remained viable. Merchants, taverns, hotels, tanneries, a brick factory and lobster factories continued to operate. A sandstone quarry, employing more than 100 people, brought Italians to the community. Pugwash had four doctors, an insane asylum, two schools, and a lawyer.

In a village built of wood, small fires are inevitable. However, Pugwash suffered four major fires, 1890, 1898, 1901, and 1929, each razing huge portions of the village. A flood, then the 1929 fire, destroyed the entire downtown and many residences.

Years of rebuilding took its toll, and unemployment increased. Men were forced to seek work elsewhere. In 1929, Cyrus Eaton, an American industrialist, returned to Pugwash, the place he was born and raised. Seeing the condition of his hometown, he gave the money needed to rebuild much of the village core and a seawall. He had a seawall built; the main street straightened, put in paved sidewalks and landscaped the park. He hoped tourism would revitalize the community. Mr. Eaton’s plans were unsuccessful at that time. 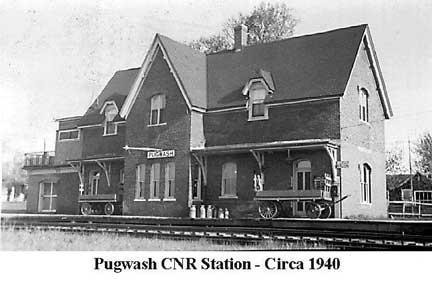 The face of modern Pugwash is quite different, descendants of the original settlers* and an influx of entrepreneurs have brought prosperity to the community. Lobster fishing and the forestry are still viable. The Canada Salt Company Ltd employs many people. Independent businesses are opening and prospering. Tourism, a large part of our economy, continues to increase.

Our strong social net includes four doctors, a hospital and a nursing home: quite a feat in this period of healthcare uncertainty. What was originally the County insane asylum (est 1895) is now the Sunset Community.  This is a state-of-the-art housing and rehabilitation centre for developmentally challenged people. Several churches and services groups are active in the community. The Pugwash District Volunteer Fire Department is well trained and well equipped. Pugwash has two fine schools: Cyrus Eaton Elementary and Pugwash District High.

Today Pugwash is like a phoenix; well feathered and soaring toward a bright and prosperous future.

* Families of Pugwash available through the Cumberland Historical Society